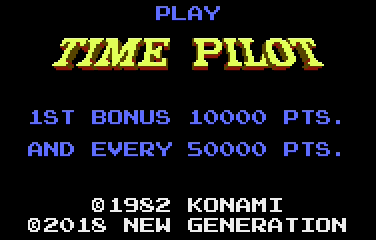 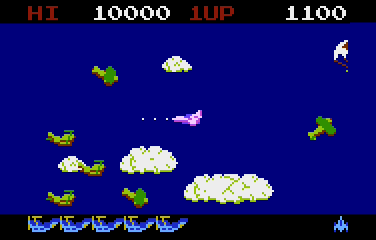 I always didn’t like it that our machine doesn’t have Timepilot game in the library. It’s not atari-friendly game to make but one day after long, long break (our last production was Forsaken Love demo in 2004) we have decided that we will take the challenge and make almost arcade perfect port for stock Atari XL/XE. At start Laoo (our coder and my friend) texted me “let’s make small 1-day production for Wapniak 2016”. I replied to him with youtube video: let’s make Timepilot. He was like “fuck you Solo!” but later on provided brilliant soft-sprite renderer.

What’s new in the final version:

What didn’t make it:

Helicopter missiles – there were no free ram for additional animated soft sprite (the soft sprites story). But the rest is there.

We think it’s good – not perfect – but we will refactor it for easy generic purpose later on. Theoretically it can render unlimited soft sprites with n-parameters (like agility, velocity, position, custom flags and so on) for every object.

A lot of things is queued/spawned to object list then process by different part of code. There is also small cool stuff like input lag fix, original arcade control (it has exceptions here and there), big cloud x player mask (to hide player P/M object under bigcloud).

Big thanx for all the feedback you provide to us. See you in our next project (it’s on the move already).