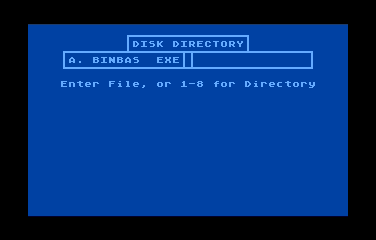 This program is the property of
the author, and it may not be sold
without his written consent.
However, it may be duplicated and
freely exchanged, providing that
all notices are left intact.

Donations (not mandatory) are
most welcomed. For complete source
listings, donations, comments and
recommendations, write to:

In the older days of ATARI, the closest thing to an automatic load were these handy little programs which could run a basic or binary file. The next step, was to add a routine to offer the user a choice of programs to run. Useful as they were, these programs had a major drawback. They could only load one type of files only. Basic or binary.
This program is a further extension of these utilities. Its major feature is the capability of running a file regardless of type. There are also additional features to make its use as easy as possible.
The utility is 100% machine language, and it may be binary loaded or renamed to AUTORUN.SYS for automatic execution. The state of the internal cartridge is of no importance, meaning that the computer may be booted without pressing the [OPTION] key.

The MENU
The files which are to be displayed must be protected. Supporting files like character sets, screens and other data files as well as DOS and DUP may clutter the display unnecessarily. By locking the main files the unwanted files stay hidden.
Pressing the 1-8 keys will display the files on the drive corresponding to the appropriate drive number. Reading the directory of a drive a second time, will remove the restriction of the locked files, and display the whole directory until the directory of another drive is read. This is not as confusing as it sounds. In short, every time the directory of a new drive is read, only the locked files will show.
Twenty six files may be displayed at the same time, each assigned a letter from A to Z. When there are more than 26 files in the directory, the program prompts the user to press the space bar for 26 more.
SpartaDos users may use the underline [_] character to separate words in a filename. This character is displayed as a space on the menu, providing the user with a better looking directory. Users without SpartaDos may use the [?] character to accomplish the same. However, a disk utility will have to be used in renaming a file with this character.
Finally, the escape key will cause the program to return to DOS, where DUP.SYS may be loaded.

FILE SELECTION
Selection of a file is accomplished by pressing the corresponding letter. Detection of the file type (Basic or binary) turns the cartridge on or off, and the loading process is continued.
Certain programs are hybrid. They consist of a machine language program, which in turn loads and runs a basic file. To keep BASIC from being turned off when such files are loaded, one of the console keys must be pressed when the selection is being made.

The LOADING process.
There are two independent loaders in this program. A binary loader, and a basic loader.

BASIC LOAD
The principal behind the basic loading process is a little tricky. The BASIC editor works by GETting a user input, and acting upon it. To make it do the same thing without user interaction, the GET routine is changed and the input is aquired from the buffer instead of the keyboard.

BINARY LOAD
Unlike other utilities which depend on DOS for loading binary files, this has its own. It enables it to be operational regardless of the DOS in use. And since this part of the routine occupies memory normally left alone by others, it should load virtually any binary file.

TECHNICAL INFORMATION
This program is actually four utilities in one. Each of the parts may be used independently, and may be used in other programs.
When the menu is entered, the contents of the accumulator are saved. A non-zero number signifies that the locked file option is to be used. A zero enables the program to display all files.
The cartridge is controlled by manipulating memory location 54017 ($D301), as well as the basic flag at 1016 ($03F8) and the cartridge state at location 6. A problem however arises when the routine is used with version 2.x of SpartaDos. It seems that due to its nature, this DOS does not allow outside interference. Every time the cartridge state is reversed, DOS resets it. Therefore, the routine also modifies the locations where the state of the cartridge is saved in SpartaDos 2.x.
In using the basic and binary loaders, the file must be closed and the name buffer must hold a legal filename. The files must be have the legal headers. ($00 $00 for basic, $FF $FF for binary) It does not matter where these routines reside, but the binary loader may conflict with a loading file. An answer to this problem, is to place the utility in the stack, at $0100 providing that the pointer doesn’t venture too low.
When a basic file is about to be loaded, the GET pointer of the editor is forced to point to a routine which simulates a keyboard input. The string RUN “Dx:FILENAME.EXT” is passed over to the editor one character at the time, and a carriage return causes the original GET address to be reinstated. With a command in its buffer, the editor will proceed to execute it.
The binary file load is completely different. Each segment is loaded separately, while the INIT vector is monitored. When this vector contains a valid address, (anything over $00) control of the processor is passed over to the routine pointed by this vector for another program execution. When the routine exits, control is passed back to this here, and the loading process is continued until the vector is loaded again, or there are no more segments to load. At this time the RUN vector is examined, and control is once again passed. At the absence of valid contents, the first memory location loaded assumes control.

The utility uses 10 single density sectors on the disk, making it an efficient alternative to DUP.SYS or typing whole filenames.