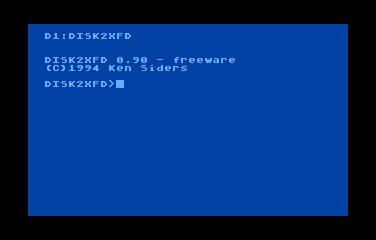 DISK2XFD v0.90 Copyright 1994 Ken Siders
This program is freeware and my be distributed, but not sold. The
only restricition is the file DISK2XFD.ARC is kept intact and
unchanged.

From now on DISK2XFD will be referred to as D2X.

D2X will convert a single sided single, enhanced, or double
density disk to XFD format for use with PC-Xformer. I believe
ST-XFormer also uses the same file format. The output can be to a
disk file (on the same or different disk) or via XMODEM to an R:
device. All you need to use to use Xmodem is to append D2X to an R:
handler (or be sure one is booted) and specify R: as the output file,
link the two computers together, and have a terminal program on the
other side that has Xmodem receive. D2X uses standard XModem with a
checksum not the XModem-CRC. If anyone wants CRC or other protocols
send me info on how the CRC code is calculated as well as other
differences. It is up to you to get an interface and rig up a null
modem cable. This is descibed in many sources and not repeated here.
I could provide docs on how to build an interface using a
max232/icl232 ic, a 74LS03 ic, and few support components. I actually
built one into DB9 hood that has a IBM compatable output (with 9 pin
ports). I don’t think I would ever try this again though. Although I
build this one myself using a SX212 to figure which SIO pins are used
for which functions. I believe this type of interface is described
somewhere.

D2X to a disk file

The format to use is:
DISK2XFD [options] outputfile

With Atari or MyDos you will be prompted for the [options]
outputfile part with a “DISK2XFD>” prompt. The output file must
specify the disk number use D1:name (or any other drive) not D:name or
name. D2X uses the drive to find out if disk swaps will be required.
Options are:
-Sn Set source drive (n is 1 to 8). The default is drive 1. The
drive must be a real drive or an O.S. simulated RAM drive that
emulates a real one. DOS type RAM drives will not work since they are
only emulated on the CIO level and not SIO level.

-W causes DISK2XFD to reprompt when done so you can translate
multiple disks without reloading the program.

Caveats: Even though the file size is a multiple of 128 bytes,
Bobterm and possible others adds an extra block to the end, making the
filesize 128 bytes bigger and XFormer would not recoginize it as a

disk. I tried De-term and it did not append the extra bytes.
Hopefully future versions of XFormer will be more flexible about disk
and file sizes.

If the source and destination is the sam drive, you will prompted
for disk swaps. D2X compresses blank sectors in memory to save disk
swaps on disks that are not full. This does slightly slow disk
writes. Future versions won’t compress empty sectors if swaps are not
required to speed output.

The line format is the same as above except with additional
options listed below. The following options are ignored on disk
output.

-R Reduce Timeout. The disk will be read and written in small
chunks. Use this option if XModem times out on the receive end
waiting for the slow atari disk drives. Most terminal programs can be
configured to eliminate this by increasing the maximum number of
retries, but some probably can not be.

After the option, use R: as your output file. Do not start the
receiver yet. Start up D2X with the appropriate options and R: as the
filename. The disk will be read and you will receive a message
telling you it is waiting for the destination. On the receiving
computer, Start XModem Download. This must NOT be XModem-CRC but
standard Xmodem (or XModem-Cksum). To abort the transfer any time,
press and hold OPTION until the transfer is cancelled. This should
automatically abort the receiver. If it doesn’t, manually abort the
receiver. You should also be able to abort a transfer on the receiver
in. If D2X doesn’t abort wither press OPTION on the Atari or type a
couple control-X’s on the receiver.

Caveats: D2X does not add extra data to the end of the file so
the problem mentioned above does not exist. The biggest problem is
that some terminal programs may not support standard XModem.

This program was tested on an Atari 800XL and a 1050 disk drive
with US-Doubler. The serial interface was a home build interface
(Rverter or SX212 type). It was tested with the BobVerter handler
from Bobterm. On the IBM end I used Crosstalk for windows as the
receiver. I couldn’t use the terminal program that comes with Windows
because it only supports XModem-CRC and YModem. I had no problems

with transfers up to 19200 baud.
It should work with any 850 compatable R: handler that doesn’t
occupy any memory above location $2400. Some interfaces may not
support rates above 9600 baud.

Include you votes for any of the following. If any already exist let
me know too.

XFD2DISK – xfd to disk possibly with XModem recieve. I will do this
first, since I need it. Is there any other way to get a file out of a
disk image?

DCM2XFD/XFD2DCM – Discomm to XFD file and vice versa. This would
probably be useful more as an IBM program. It probably wouldn’t be
too difficult to add to DISK2XFD. I spent a while decoding DISKCOMM
files, might as well put it to use.

On single drive systems with a command line type DOS, start it up
without parameters so you can swap disks.

Other Programs to look for. All support command line and menu based DOS’s.