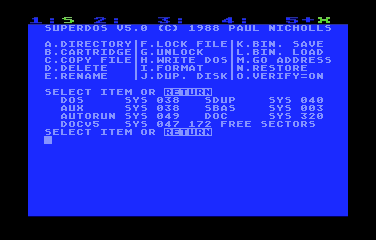 New features for the v 5.0 upgrade:

Using SUPERDOS with an XF551.

Using SUPERDOS with a RAMdisk.

A RAMdisk is a portion of memory configured to emulate a disk drive. The
computer uses it like a drive. RAMdisks are much faster than physical
drives and are very convenient for many jobs. Note, however, that the
RAMdisk is erased when the computer is turned off. Be sure to copy your
RAMdisk contents to a physical disk before turning off your computer.

RAMdisk users are advised to make an extra “reboot” SUPERDOS disk. Use
this extra disk to boot the computer without losing the contents of the
RAMdisk. It works like this: you can reboot your computer without turning
it off with a coldstart switch modification or by POKEing 580, 1 and then
pressing [Reset]. This reboot process does not erase the “extra” memory
area and the contents of the RAMdisk are preserved.

However when SUPERDOS loads, it automatically re-initializes the RAMdisk
which erases it. Here’s how to prevent that: from SUPERDOS load AUX.SYS.
Press X to turn RAMdisk Enable off (0). Press P to re-initialize DOS.
Press Z to return to SUPERDOS. Place a blank disk in your drive
(initialize it if necessary) and press H to Write DOS and SDUP to the
blank disk. Label this new disk REBOOT SUPERDOS.

Always place the REBOOT SUPERDOS disk in drive one before doing a
coldstart. The 5+ indicator in the Status line will be blank, but as soon
as you access the RAMdisk, it will be restored.

SUPERDOS works fine with Atari 800s and 400s (expanded to 48K). Since
these computers do not have the extra 16 Kbytes of memory “under” the
Operating System, SUPERDOS can’t store SDUP there. If you have an Axlon
compatible memory expansion, SUPERDOS will store SDUP there.

If you only have 48K bytes, you will have to decide how you want SUPERDOS
to handle SDUP. You can have SDUP remain on disk, or you can make it
“resident” at the bottom of memory.

If you leave SDUP on disk, it will free up more memory for your program,
but will take some to load if you need it. Additionally when it does
load, it will overwrite some of the program area and destroy the data
there. Be sure to save your materials before calling SDUP.

If you make SDUP resident, you will have less memory for your program,
but SDUP will be available instantly and it will not overwrite your
program.

It is recommended that you make two SUPERDOS disks, one with SDUP
resident, one with it not resident. Here’s how to do it: SUPERDOS is
shipped with SDUP not resident. Make a copy of your master disk and label
it SUPERDOS NOT RESIDENT. From SUPERDOS, load AUX.SYS. Press Y to make
SDUP resident. Press P to re-initialize SUPERDOS. Press Z to return to
SUPERDOS. Put a blank disk in drive one (initialize it if necessary) and
press H to write SUPERDOS and SDUP to the blank disk. Label this disk
SUPERDOS RESIDENT.

Boot your system with the appropriate disk for the job you want to do.