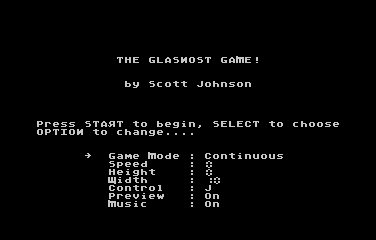 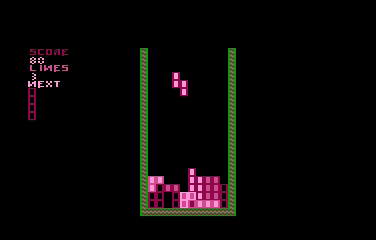 *The Glasnost Game
*by Scott Johnson

GLASNOST is sweeping through Russia and Eastern Europe! Therefore it is only fitting that somebody write a game to commemorate Glasnost. In the interests of WORLD PEACE and HARMONY, here is my submission.

Unfortunately, several Communist hard-liners are trying to undermine President Gorbachev’s reforms, and are attempting to rebuild the Berlin Wall. They are dropping chunks from the old wall (genuine chunks, mind you–not the fake variety found in most tourist traps) on the border, in an attempt to close once again the iron curtain. You must prevent this from happening. Manuever the blocks in such a way that they form complete rows, for when a complete row is formed, the blocks in it will disappear! Unfortunately, ealry success will make the hard-liners unhappy, and they will just build the wall faster and faster…

When the Glasnost Game loads up, you will hear a stirring rendition of the Soviet National Anthem, and be presented with an option menu. Using your joystick or the OPTION and SELECT keys, you can change any of the following options:

Game Mode: You have a choice between TOURNAMENT mode and CONTINUOUS mode. In tournament mode, the blocks come in waves. After each wave, you get a bonus for a low wall, and the wall is cleared. In continuous mode, they just keep coming.

Height: Random blocks are placed at the bottom of the wall. Use this option to select the number or rows of random blocks.

Width: Changes the width of the wall. Default is 10.

Preview: ON means the computer tells you what the next block is. OFF means it doesn’t.

Music: Turns the music on and off.

When your game is over, and if your score is highest, you can add your name to the Glastnost Game Hall of Fame. Just be sure your disk is still in the drive (this program saves the high scores to disk.)

Scott Johnson is a student in Computer Engineering/Computer Science at Oregon State University. He has had an Atari 8-bit of some kind for eight years.