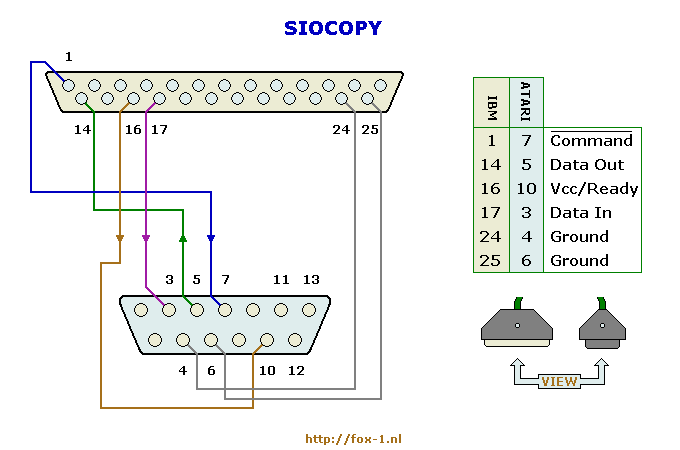 You should have as a minimum the following files:

This program will allow the user to connect the atari disk drive to
the parallel port (using a simple cable) and copy the atari disk to the
IBM harddisk. I have included the source code to allow others to
modify or use portions of this code if they so desire.

This a the beta release (I have only tested this software on my
computer) and also the final release on my part. This software
works on my IBM compatible 486DX running at 33Mhz. This software
will not run on my 286 running at 12Mhz. It is possible that this
program will only work on my machine, but here it is anyway.

Print out the program “siocopy.cpp”, the instructions on how to
build the cable are there. The voltage levels coming from the
IBM parallel port are TTL levels, the same as the atari SIO port.
There is no chance of anything being damaged by an improperly
build cable (even if you short the pins to ground).

Once you have built the cable, cannot the 25-pin male d-shell to the
primary parallel port of the IBM computer (also called LPT1:). This
program uses the i/o mapped 0x3fa parallel i/o control port. If you
want to use a differnet parallel port, you will need to replace all
instances of a read or write to 0x3fa. I did not use: #define PIO 0x3fa
statement because the Borlandc inline assembler does not allow this type
of global constant. Next, connect the 13 pin Molex connect to the atari
disk drive. Do not daisy chain anything else to the disk drive
SIO port (especially not the atari computer).

Power up the IBM pc and the atari disk drive. Insert a disk you wnat
to copy into the atari drive. Use “test.sd” as the filename for this example.
Run the siocopy.exe program as follows:

I also allow the user to enter a different serial i/o rate (other
than 19200 bits per second). There may be some slight differneces
in atari drives that may require the user to play with the serial rate
to find the most relaiable speed. Choose a serial i/o rate from
about 18250 to 19400. Any SIO rate above or below these values will not
work at all. For example: siocopy myfile.sd -s 18750

I have included all of the source code, so if you have a problem
fix it yourself. I have not documented this program up to my usual
standards, but I think everything is fairly straight foreward. If
you really feel like you must contact me, you can do so until August
6, 1994 using my internet address: munoz AT utdallas DOT edu
After that date, I do not know what my internet address will be.

I hope you find this little hack useful,