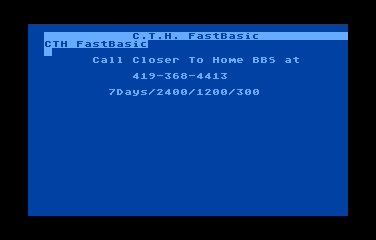 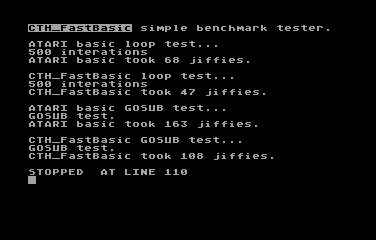 CTH FastBasic is compabable with ATARI basic. Any ATARI basic program should run under CTH_FastBasic. The only difference will be a noticable increase in your program’s execution speed. This speed increase should be in the neighborhood of 30%-80%. In some cases the speed increase could be up to 300%. You will find the largest speed increase when running large basic programs as opposed to small ones.

To get started, just load CTHFAST.COM. Instead of ATARI basic’s familiar READY prompt you will see CTH FastBasic. You can test out the speed increase with the supplied basic program named BENCHTST.BAS. Then try CTH_FastBasic out on some of your own programs. Have a watch or stopwatch handy, and compare CTH_FastBasic against ATARI basic. As I mentioned before, the biggest increase in execution speed will be seen on your larger basic programs. It is easy to switch between the two with a simple POKE. You POKE 54017,253 to install ATARI basic, and POKE 54017,255 to switch to CTH_Fastbasic. This is necessary only if you want to switch back and forth between the two.

If you go to DOS from CTH_FastBasic you will have to do something you aren’t accustomed to in order to return to CTH_FastBasic. With Sparta you must type RUN A04D, and with Atari dos 2.5 and 2.0 you must use the M option of the DUP menu. After typing M you specify A04D as the run address. The reason you must do this instead of typing CAR or B with Sparta Dos/ATARI Dos is because there is no cartridge present, and the dos knows it. So by using this procedure you will return to the CTH_FastBasic program that is in ram. If using Sparta Dos, your basic program will be preserved. Going to ATARI dos will wipe out your basic program. Alternatly, you can use the supplied program named B to return to basic. This is probably the safest way, preventing a mistyped address from doing who knows what to your system. Another small utility program included in this ARC file is named SC. I use it when I want to use CTH_FastBasic with MOE. Just put it in your batch file immediatly before MOE is loaded in. Otherwise MOE won’t allow CTH_Fast Basic to set the screen up. You can use the SC utility in the same manor for most programs that refuses to allow CTH_FastBasic to create a display list for the screen.
Also, using the RESET key will wipe out CTH_FastBasic.

I suggest that your run CTH_FastBasic only on completed programs, not programs under the process of development. This is because there is a difference between the way ATARI basic and CTH_FastBasic uses the CONT and GOTO statements. If you do use CTH_FastBasic and edit a program be sure to use RUN instead of CONT and GOTO.