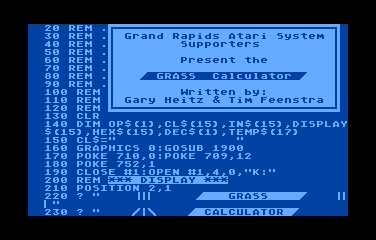 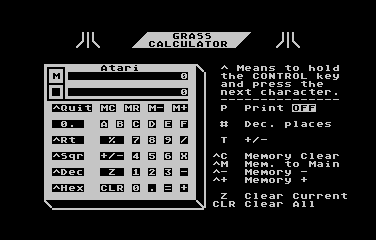 NOTICE: This article originally appeared in the May, 1989 issue of Atari
Interface Magazine and may be freely distributed or reprinted in non-profit
User Group publications as long as the article’s author and Atari Interface
Magazine are credited AND this notice is reprinted with the article. All other
publications must obtain written permission from Unicorn Publications, 3487
Braeburn Circle, Ann Arbor, MI 48108, Phone: (313) 973-8825 before using this
article.

The GRASS Calculator was created as part of the Grand Rapids Atari System
Supporters’ BASIC programming class. We started by explaining cursor controls
and simple PRINT and POSITION statements.

One unusual feature that was included affected how the calculator’s memory
worked. On a normal calculator, you store something in memory but unless you
have a pretty good memory yourself, you can easily forget what you stored
there. The GRASS Calculator has two number displays. One is like that on any
calculator — the main display. The second one always shows what has been
stored in the memory.

The other features of the GRASS Calculator are:

Print – will print to a printer just like a more expensive printing calculator
will do.

Change signs – This feature is like the +/- key on most calculators. It will
change the current number from positive to negative or vice versa.

Clear and All Clear – Clear erases the number you are currently entering (good
for when your finger goes a little crazy on you and hits the wrong key). All
Clear will clear everything in the main display. It does not clear the memory,
though.

Percent – This will convert a number into its percent.

Quit – I added this feature because it allows for a clean exit from the
calculator without having to hit the RESET button.

Because the GRASS Calculator is not just for adults with perfect coordination,
which does not include myself, I have added some “safety” features. The BREAK
key will not work. The two other keys that will get you nowhere are the Atari,
or inverse, key and the Caps key. If you hit one of these keys by accident,
there is no need to worry; they will be ignored.

Here’s an idea for any BASIC programmers out there or anyone interested. If
you renumber this program to begin with a high line number, like 30000, you can
do your programming and GOTO the first line of the calculator to use it and
QUIT when you are done with your calculations. This way you don’t have to keep
loading and reloading the program you are working on.

One last thing to mention. The two inverse letters that precede each line in
the type-in program are checksums. They work the same as any BASIC program
that you find in Antic or ANALOG. You can use either of their type-in programs
to type in the GRASS Calculator.

I hope you enjoy using it.