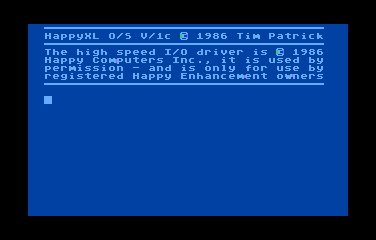 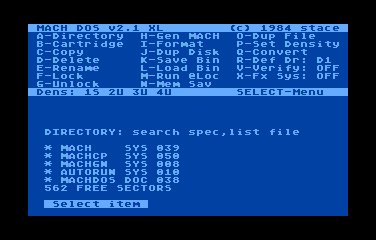 A-Disk directory list. Similar to DOS II. Minor change to read whole directory into memory before displaying it. If MEM.SAV is used, it will ask permission to overwrite the program area.

B-Run cartridge. Same as DOS II. If you are using MACH on one of the newer XL series systems (excluding the 1200XL), you will have a pleasant surprise. MACH switches the XL BASIC in an out to give you more ram while operating in MACH mode. BASIC is switched back in when you request option “B”.

H-Write MACH files. Changed from DOS II to load the “MACHGN.SYS” program from the system disk. If the system disk is not in D1:, MACH will ask for it to be inserted. Don’t worry if you have changed the density; MACH will set it to load the program then reset it to what it was, if necessary, for you to write the MACH files at a density different than the boot disk.

I-Format disk. Similar to DOS II. The only difference is that if you try to boot a disk that was formatted under MACH but does not contain any operating system, you will NOT get a boot error. Instead, it will boot as though the disk drive was not turned on.

J-Duplicate Disk. Similar to DOS II with one major exception: after you have told MACH the source and destination drives, it will ask you if it is a “DOS” or “BOOT” disk. Atari DOS II’s “J” function is the same as the “DOS” option here. The “BOOT” option will perform a sector by sector copy of your disk, regardless of the contents.

K-Binary Save. Same as DOS II.

O-Duplicate File(s). The MACH DUP FILE is really a full one drive copy function. If you specify wild cards for more than one file, MACH will read as many files into memory as it can, then ask you to switch disks, repeating the process as times as necessary to complete the request.

P-Set Density. Asks you for the drive number to reverse the density (between single and double). The menu display will be updated to reflect the new density.

Q-Convert File(s). Similar to the “O” function with one important difference: the output will be at the opposite density as the input.

R-Set Default Drive. Changes the drive which is to be assigned as D1:. In other words, if you say the default drive is 2, then all requests for D1: will be routed to drive 2, and all request for D2: will be roued to drive 1. Sounds a little confusing, but it won’t be after you try it a couple of times.

X-FiX the non-resident portion of MACH in memory. Transfers to the cartridge or XL BASIC will have approximately 7k less ram, but transfers between DOS and the cartridge will take less than half a second.

1.The first thing you will notice is the new menu. The MACH “flip-up” menu is unique among Atari operating system. You can control the menu and display totally. Pressing the SELECT function key flips the menu up and down, revealing the display contents which are behind it.

2.The next thing you notice is that selecting a menu option does not require hitting the return key. You can now type non-stop when requesting menu functions.

4.Unlike some other Atari operating systems, you can generate MACH on ANY diskette which is in DOS II format. It does NOT have to be formatted by MACH.

9.You cannot open D:MACH.SYS from your program. You must use the console processor to generate MACH files.