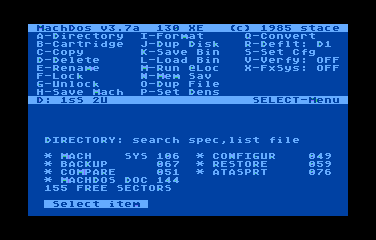 A. DISK DIRECTORY LIST.
Similar to DOS II. Minor change to read the entire
directory into memory before it is displayed. If MEM.SAV is
used, it will ask permission to overwrite the program area.
The biggest changes are:

a) Sorted directory display. Sort options are sort by
Name-Ext, Ext-Name, or no sort at all. See CONFIGUR
utility to change.

b) The directory is displayed two entries per line when
directed to the screen. It is still one entry per line
for other output devices (printer, disk file, etc)

c) Directing the output to a disk file now works!

B. RUN CARTRIDGE.
Same as DOS II. If you are using Mach on one of the newer
XL series systems (excluding the 1200XL), you will have a
pleasant surprise. Mach switches the XL BASIC in an out to
give you more ram while operating in Mach mode. BASIC is
switched back in when you request option “B”.

H. SAVE MACH.
Changed from DOS II to load an overlay from the boot disk.
If the system disk is not in D1:, Mach will ask you to
insert it. Don’t worry if you have changed the density;
Mach will set it to load the overlay, then reset it to what
it was, if necessary, for you to write the Mach file at a
density different than the boot disk.

I. FORMAT DISK.
Similar to DOS II. The only difference is that if you try to
boot a disk that was formatted under Mach but does not
contain any operating system, you will NOT get a boot error.
Instead, it will boot as though the disk drive was not
turned on. If you have double sided drives and have
configured the drive as double sided, Mach will use both
sides (1427 free sectors or 360K).

J. DUPLICATE DISK.
Similar to DOS II with one major exception: after you have
told Mach the source and destination drives, it will ask you
if it is a “File” or “Sector” copy. Atari DOS II’s “J”
function is the same as the “File” option (only those

sectors used by files are copied.

The Sector option performs a sector by sector copy of your
disk, regardless of the contents.

O. DUPLICATE FILE(s).
The Mach DUP FILE is really a full one drive copy function.
If you specify wild cards for more than one file, Mach will
read as many files into memory as it can, then ask you to
switch disks, repeating the process as times as necessary to
complete the request. The files will be processed in
alphabetical order.

P. SET DENSITY.
Asks you for the drive number to reverse the density
(between single and double). The menu display will be
updated to reflect the new density.

Q. CONVERT FILE(s).
Similar to the “O” function with one important difference:
the output will be at the opposite density as the input. In
other words, a single drive density converter!

R. SET DEFAULT DRIVE.
Changes the drive which is to be assigned as D1:. In other
words, if you say the default drive is 2, then all requests
for D1: will be routed to drive 2, and all request for D2:
will be roued to drive 1. Sounds a little confusing, but it
won’t be after you try it a couple of times.

X. FIX SYS.
FiX the non-resident portion of Mach in memory. Transfers
to the cartridge or XL BASIC will have approximately 7k less
ram, but transfers between DOS and the cartridge will take
less than a half second.

CONFIGUR. This program is used to set Mach configuration
options.

A-[set] Active Drives [On/Off]
Define the drives you have active. After pressing “A” hit
the digit key corresponding to the drive you want to
toggle. Remember, if you use RamDisk, you must make drive
4 active.

B-[set] File Buffers
Sets the number of 256 byte file buffers. This is the
maximum number of files you can have open at any one time
(try 3 or 4).

D-[set] System Lock
Toggles the resident console processor switch. Eliminates
need to access disk when returning to Mach from Basic, or
other cartridge. Uses an additional 7k of memory though.

G-Activate [deactivate] RamDisk
Toggles RamDisk switch. Note: this does not effect the
running system, but will become effective the next time
the system is booted.

H-Configure Drives
Will request drive number to configure. After entering
it, will display current setting for number of sides and
density. Hitting the number next to sides or density will
toggle that setting. Hitting RETURN will return to Drive
question. Hitting escape or return will go return to main
menu level.

START -Apply Changes to Mach
Mach is modified to conform to the Parameters shown in the
menu, and return to the main Mach menu.

The changes are only applied to the running version. You
must use Mach menu option “H” to make the changes
permanent.

SELECT-Quit, don’t change
Return to the main Mach menu without making any changes to
the system.

NOTE: any drive configuration changes will remain in
effect.

BACKUP. This program is used to copy disk images into Mach
Files. Several disks images can be stored on a single DS/DD
diskette. Really saves on disk storage since most disks dont
use the whole thing.

A-Source Drive
Define the drive that is to be copied.

B-First Sector
The starting sector to be copied. default is 1

C-Last Sector
The last sector to be copied. Default is 720 for single
side, and 1990 for double sided diskettes.

D-Read Source (start backup)
Just what it says. Starts running the copy. Will not
start if target file name and drive are not set.

Z-Quit [and return] to Mach

RESTORE. Opposite of BACKUP. Writes
disk image files back to a disk.

E-Target Drive
Drive with diskette to be reloaded

I-Format Target
Toggles format switch. If on, will format diskette before
reloading it.

R-Restore data
Start reloading disk. If the target drive is
reconfigurable (eg Percom, INDUS, RANA, etc) it will be
set appropriately for the backup image.

Z-Quit [and return] to Dos

COMPAR. Sector by sector comparison of two disks (if you don’t
really believe that BACKUP/RESTORE work then try this one to
verify, otherwise tells you any differences between disks.

The program requires at least two disk drives to function.

A-[set] Drive A
Defines one of the drives to be used in the comparison.

B-[set] Drive B
Defines the other drive to be used in the comparision.

Starting sector for comparison Default is 1

L-Last Sector
Ending sector for comparison. Default is 720 or 1990
depending on SS or DS sectors.

Z-Quit [and return] to Mach

PATASC. A very fast print program to print real ATASCII
characters on most printers (at least the ones that look like
epsons for graphics printing). It also has an intelligent line
wrap routine, understands BASIC line numbers, and Remarks,
generates line numbers for ACTION, Prints titles, page numbers.
Very good for programmer documentation.

The program initially asks for the current date to be printed
on the title line. It also asks for the file name and title on
entry to the program.

B-[turn] Generate Line #s [off/on]
Set on if file does not have line numbers (eg ACTION or
AMAC files). Program will generate line numbers for each
line. Other wise, it will use the line numbers in the
file right aligned.

C-Set Title
Enter a title up to 90 characters long.

Q-Quit [and return] to Mach

1. MENU WINDOW
The first thing you will notice is the new menu. The
Mach “pull down” menu window is unique among Atari
operating systems. You can control the menu and display
totally.

Pressing the SELECT function key flips the menu up,
revealing the display contents which are behind it. The
next press of SELECT pulls the menu window back down.

There are several new bits of data on the menu. The top
line shows the version (currently 3.7) and the cpu and
ramdisk configuration that was set the last time CONFIGUR
was ran. Currently, Mach supports 130XE, 800XL
800 with MOSAIC, INTEC, AXLON, MACE,
and 800+ memory expansion systems.

The bottom line of the menu shows the status of each
active drive. The display shows the current
configuration of each drive (single or double sided,
single or double density, or not on. Drives can be
activated or deactivated by the CONFIGUR utility.

2. ONE KEYPRESS COMMANDS.
The next thing you notice is that selecting a menu
option does not require hitting the return key. You can
now type non-stop when requesting menu functions.

3. INTELLIGENT SYSTEM DISK HANDLER.
Whenever Mach wants the system disk (to load the
non-resident part, or to load the Save Mach overlay), it
will instruct you to insert it into drive 1 (real D1:).
It will reset the density to the proper setting for the
system disk. The system disk is defined as the one you
booted from.

4. SAVE SYSTEM TO ANY DISK.
Unlike some other Atari operating systems, you can
generate Mach on ANY diskette which is in DOS II or Mach
format. It does NOT have to be formatted by Mach, nor do
you have to save space for Mach at format time.

8. INTELLIGENT SUPPORT OF DOUBLE SIDED DRIVES
If you have double sided drives Mach will automatically
configure the drive to DS when you open a file from a two
sided diskette. Conversely, it will configure to single
sided when a one sided disk is installed. The only
restriction is that the two sided must have been
formatted by Mach.

9. FEWER SYSTEM FILES with DIFFERENT NAMES.
The operating system file names are totally different.
There is no DOS.SYS or DUP.SYS files. The only file is
MACH.SYS. Also, MEM.SAV has been changed to MEMSAV.SYS.
Even though there is only one file, Mach’s console
processor (equivalent to DUP.SYS) is non-resident and
will be reloaded when necessary. AUTORUN.SYS files are
processed just like DOS 2.0.

10. MACH.SYS is PROTECTED.
You cannot open D:Mach.SYS from your program. You must
use the console processor to generate Mach files.