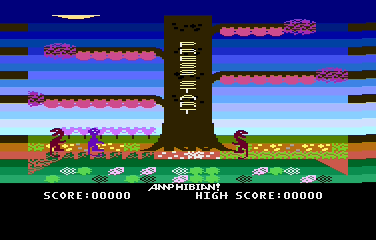 This program was written between Jan. and June 1982, with many changes
since then. It was initially sold in local stores, but it was soon
pirated and found its way as far west as Oklahoma. I am putting it
out to the public partly because I think it is a neat game and I would
like people to have the latest update and also to find out how far it has
spread. If you have a copy, and did not buy it in a Stochastic Systems
package, please drop me a note as towhere you got it from. I am no
longer interested in any monetary gain from the game, so feel free to
copy it, only get the BEST version, THIS ONE.

You are the last of a race of intelligent amphibians. You are
being bothered by various monsters, all of which want to kill you. Your
object is to get rid of as many as you can. If you run into one out of
the water, it will kill you, but don’t fret, part of your body will
fall into the water and begin to grow another amphibian. This process will
cost you four fruits. Needless to say, if you die and there are less
than four fruits left on the tree, your mission has ended.

WIMP MONSTER: At the start of the game, the dreaded Wimp Monster is
very common. He is also very stupid. If you hit him on the head with a
fruit, he goes away.

FAST MONSTER: This monster is faster than the Wimp Monster. He also has
an extra feature: If you hit him on the head, he will fall into the
water. If he is in the water, you can drown him by simply running into
him. If he swims off screen, he will climb back out of the water. (Note:
It is rumored that some times he likes the water so much that he will
come back on the screen, giving you a second chance to drown him.

CLIMBING MONSTER: When this guy shows up, watch out. If you hit him
on the head with a fruit, he will go away, but if he gets to the trunk of
the tree, he begins to climb up. If he gets to your level, he turns to
see you and starts moving very fast to get you. Your best bet is to kill
him fast, or hide in the water.

FISHER: He is not a monster in that you want to kill him. He will kill
you, but his real reason for being here is to try and catch fish for
dinner. If he goes over you in the pond, his fishing line will get you.
You can not harm him, but after making one pass by the pond he will
go his merry way.

LOONY BIRDS: These fly to the end of a branch and then walk to the trunk,
dropping fruit as they go. If the fruit hit a monster, you get the
points, but usually the fruit is lost. You can kill the bird by just
running into it.

FRUIT: You can drop the fruit by positioning yourself over the fruit
and pressing the joystick button. Only one fruit may be in the air at
one time.

TREE: You climb the tree by moving to the trunk and pushing the stick
up. You can jump down from one branch to another by pulling down.
WARNING: The lower right branch is too high. You die if you jump off
this one.

THE SUN: This dries you out. You turn from yellow to dark red-brown
to black to dead. Jump in the water to turn back to yellow.

You get points and a free fruit every time you hit a monster with a fruit,
or otherwise kill a monster. Points differ with speed. Press OPTION for
fast, SELECT for slow. At certain scores you will be rewarded with
bonus fruit.

Each time you die, four fruit leave the tree and a funeral dirge begins.
To cancel the dirge, press the joystick button. You will then grow
a new amphibian if there are enough fruit.

The game ends when you run out of fruit. Some ending music will begin.
You many cancel this and start a new game by pressing the joystick button.

To load, rename the file AUTORUN.SYS on a DOS 2 disk, or load it using
command L from the DOS 2 menu, or using the LOAD command from DOSXL.