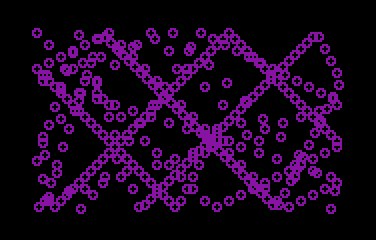 After watching the DragonBob part of Slight’s “Bitter Reality” megademo, I decided to try my hand at the animation routine. (I should use the display list, but was lazy).

The animation is done by having three screens which are constantly flipped through. An object (“bob”), in this case a small circle, is moved around the screen. It is placed on the current screen, so when the next frame appears, it is gone. In the next frame after THAT, it is gone as well. Finally, in the NEXT frame, it reappears. It sounds dumb, but when it’s moving, it looks like they are ALL constantly moving. (Oh, and you use THREE frames because if you used only two, there’d be only motion and no DIRECTION).