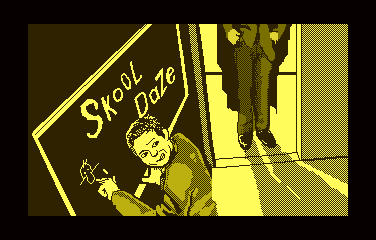 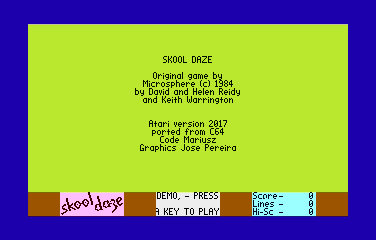 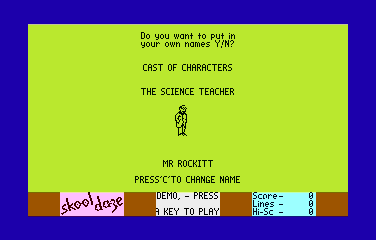 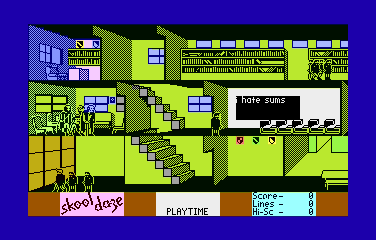 (Description as published on AtariAge)

The classic SkoolDaze game is finally available for your Atari!

In the role of our hero, Eric (or any other name you decide to call him and the rest of the cast), you know that inside the staffroom safe are kept the school reports. And, being Eric, you realise that you must at all costs remove your report before it comes to the attention of the Headmaster.

The combination to the safe consists of four letters, each master knowing one letter and the Headmaster’s letter always coming first. To get hold of the combination, you first have to hit all the shields hanging on the school walls. Trouble is, this isn’t as easy as it looks. Some of them can be hit by jumping up. Others are more difficult. You could try and hit a shield by bouncing a pellet off a master’s head whilst he is sitting on the ground. Or, being Eric, you may decide to knock over one of the boys and, whilst he’s flattened, clamber up on him so that you can jump higher.

OK. So all the shields are upside-down, disorienting the poor masters. Knock them over now and, before they can stop themselves, they’ll reveal their letter of the code. All except for the history master, of course, who because of his great age and poor eyesight can’t be trusted to remember. His letter has been implanted into his mind hypnotically. To make him reveal it, you must find out the year he was born (which, in case you were wondering, changes each game). Then, creep into a room before he gets there and, if the board is clean, write it on the blackboard. When he goes into that room and sees his birthdate he will, as if by post-hypnotic suggestion, give away his letter.

Now that you know all the letters of the combination, all you have to do is work out which order they go in. You know that the Headmaster’s letter is always first, but as for the other three … you’ll just have to try the various possibilities. Find a clean blackboard and write out a combination.

Rush back to the staffroom and jump up to reach the safe with your hand. If nothing happens, then the combination must be wrong, so you’d better find another clean blackboard and try a different one.

With the safe open, your troubles still aren’t over, as the upside-down shields are rather a giveaway. You now have to hit all of them again.

Done it? Congratulations! You are now allowed, along with all your friends, to move on to the next class at school. But remember, there will be reports at the end of this term…..

Boys shall attend lessons as shown in the timetable at the bottom of the screen. (Remember that because you cheated in the exams last year, you always go to the same lessons as the swot.)
Boys do not score points by attending lessons, but may be given lines if caught in the wrong place.
Boys who acquire over 10,000 lines shall be expelled immediately from the school.
Boys are not allowed to enter the staffroom or the Headmaster’s study. Take care.
At playtime, boys are supposed to be playing and not in any of the classrooms.
Boys shall not hit their schoolmates.
Boys shall not fire catapults.
Boys are expected to walk quietly in the corridors, they are not for running or sitting in.
School dinners are compulsory.
Boys will be neat and polite at all times.