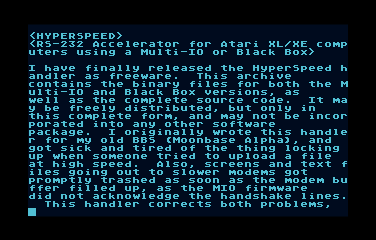 I have finally released the HyperSpeed handler as freeware. This archive
contains the binary files for both the Multi-IO and Black Box versions, as
well as the complete source code. It may be freely distributed, but only in
this complete form, and may not be incorporated into any other software
package. I originally wrote this handler for my old BBS (Moonbase Alpha), and
got sick and tired of the thing locking up when someone tried to upload a file
at high speed. Also, screens and text files going out to slower modems got
promptly trashed as soon as the modem buffer filled up, as the MIO firmware
did not acknowledge the handshake lines. This handler corrects both problems,
providing both full 19200-bit throughput as well as hardware flow control.
This is a CIO-level handler. It only replaces the CIO-level routines (OPEN,
CLOSE, GET, PUT, STATUS, XIO), but does not do low-level I/O, as there is no
provision in th OS to patch into the SIO vector. This means that programs
like the Carina II BBS cannot use this handler, as its core (MOE) uses the SIO
and Device Control Block to access the modem. To use the handler, select the
file for your interface (MIO or BB) and copy it to your working
drive/directory. Both are standard DOS binary files, and will load/run from
the command line.

When installed, the handler will raise LOMEM by just under 1200 bytes. I’m
sure you will be amazed by the improvement in performance this new handler
will provide.